Update to My Mum Tracy Beaker

Back in March, a conversation grew from the news that Jacqueline Wilson had written a sequel to the series of books about Tracy Beaker, My Mum Tracy Beaker.

The book was described thus: Tracy, who in the 1991 bestseller chronicled her childhood in a care home nicknamed the “dumping ground”, is now trying her best to raise a child on a low income in an expensive city and a materialistic world. As a single mother who is in and out of work, she struggles to make ends meet.

At the time I questioned why Tracy Beaker, the first child to be portrayed in care proper and with an absolutely huge following was being portrayed as a single mum on the dole. I also questioned whether Wilson was reinforcing a care stereotype.

It seems the blurb on Amazon has now been updated or maybe it was just the original description wasn’t very well thought out by the publicists.

“Jess and Tracy Beaker are the perfect team. Jess thinks Tracy is the best mum ever (even when Tracy shouts at her teachers). Tracy is fun and daring, but she also works hard to give Jess the family home she desperately wanted when growing up in the Dumping Ground.

Their flat might be a bit mouldy but it’s their happy home.

But when Sean Godfrey –Tracy’s rich new boyfriend – comes onto the scene, Jess is worried things are going to change.

What if Sean wants to turn Jess’s brilliant mum into a new person altogether? Sean’s superstar mansion and fancy cars might have been Tracy’s childhood dream, but maybe the Beakers’ perfect home was right in front of them all along…” 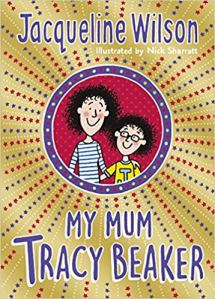 Here we have a different book to the one described by Wilson in various interviews in newspapers. Here Tracy works hard to give her daughter a good enough home something many care experienced people will identify with. How many of us when bringing up our children remembered what it was like to be the poor child at school? How many of us looked longingly at the ice cream being devoured by friends on a day out to the local lido? How many children really did dream of meeting a rich person to marry and make their dreams come true?

I never did, somehow always having a more realistic idea of marriage. At thirteen, for an autobiographical project at school, I wrote, either I would live on an island writing books or my husband would be in the navy and spend long periods of time away from home. This it seems was my recipe for a happy marriage!

Like many children of single parents, when mum or dad meets someone new, a child will worry if their lives will change. From a team of two, things change and sadly not always for the better of the child.

Possibly in response to the ‘grumblings’ on social media, The Bookseller reported that Wilson said she didn’t want to write a “fantasy story” for children, so many of whom think being rich and famous is the only way to lead a happy life. Wilson has Tracy thinking her problems are solved by starting a relationship with a wealthy ex-footballer, but once she moves with Jess from her estate to his big house, she realises fame and fortune don’t necessarily make people happy. “I wanted to give her a taste of this life with the boyfriend, but show that there are actually more important things in life,” says Wilson. “I’m having my cake and eating it, too.”

So there we have it, a different book? Or a slightly altered one? And does it matter?

I think it does. The care experienced child, teenager, person is too often portrayed in a negative and stereotypical way. Possibly Jacqueline Wilson read about the negative response to the latest book and decided to do something about it.

I also suggested that it was about time publishers had a conversation around care in fiction, like they have for other less featured diverse characters and include the care experienced reader too. It seems somebody heard that.

Who Cares Scotland started a book club, where they ask such questions as “Is it a positive portrayal of Care Experience? Is it accurate and rounded or does it encourage prejudice?”

Back in August, book lover and First Minister of Scotland, the SNP Leader and MSP for Glasgow Southside, Nicola Sturgeon hosted the Who Cares? Scotland Book Club at Bute House. She discussed the Harry Potter books with care experienced people and said: “It is important care experienced people are able to embrace their care identity and being able to identify with characters in books or the media who have had the same experiences can help with this. Harry Potter is an excellent example of this, as it has given many people the opportunity to see experiences, often similar to their own, represented in popular culture.”

If you thought this was the highlight of that very special day, you’d be right and wrong. The First Minister ended the day by sending a tweet to J.K Rowling who delighted the care experienced community by tweeting back: 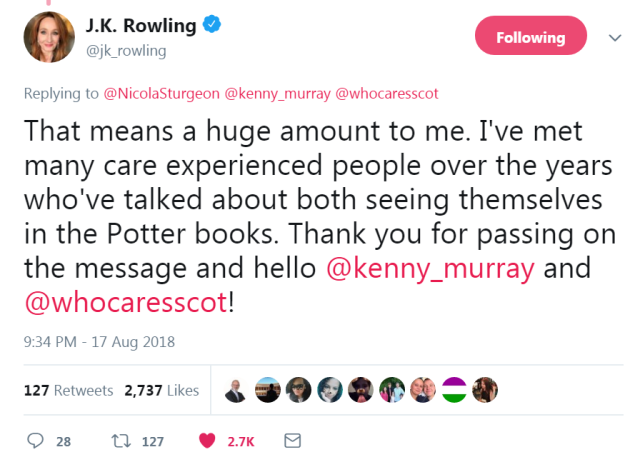 And if that wasn’t exciting enough, Who Cares? Scotland, has been given the opportunity to meet with Jacqueline Wilson and let her know what Tracy Beaker means to care experienced people. If you’re care experienced and want to attend see details below: 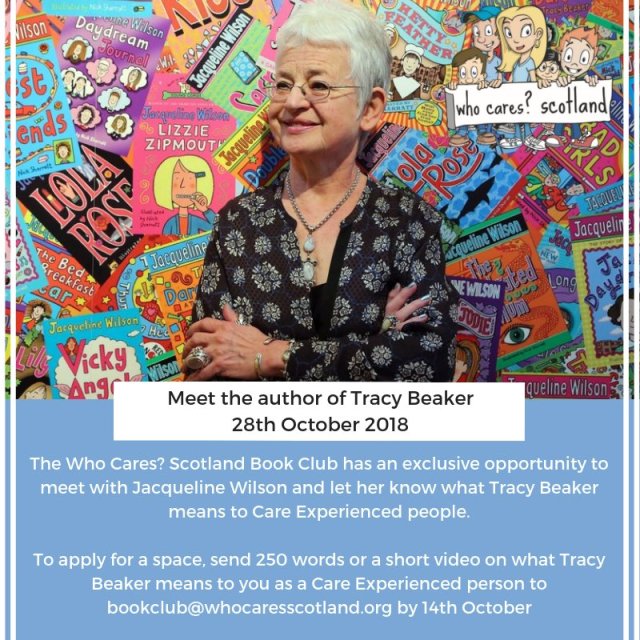 So there we have it. There are many more conversations and much more awareness about the representation of care experience in the media nowadays than when I first started work on my PhD back in 2014. So much so that I’m wondering where I now fit into this conversation! That though is good, it’s important that researchers keep up to date with what is happening around their subjects so that they can continually re-evaluate their research and make changes if necessary. That said, I have to dash. I’m off to 1976 and the first performance of the Sex Pistols, to check what Marianne, the protagonist of my PhD novel, was wearing…