#AdventCalendar Day 19 #Orphans and #CareExperience in fiction: #The Fortunes and Misfortunes of the Famous Moll Flanders by Daniel Defoe 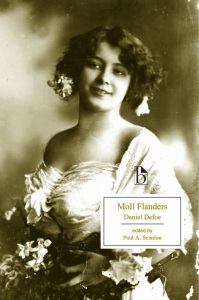 Moll begins life as an orphan, and her life will in fact be defined, from start to finish, as one of profound isolation. Moll’s early abandonment is but the first in a long line of such desertions, and the novel will continue divesting Moll of all her friends and relations at a rapid rate. The basic aloneness of human beings was a favorite theme for Defoe. Although Moll exists in the midst of a bustling and crowded urban world (rather than being stranded on an island like Robinson Crusoe), she forges almost no enduring loyalties or friendships. On the rare occasions when she does find fellowship, Defoe does not allow Moll’s interpersonal relations to become the focus of the novel.

Moll’s solitary and unpropitious start in life also initiates her remarkable self-sufficiency. That she divides herself from the band of gypsies at the age of three is an index of the power this heroine will have to steer and direct her own life. While Moll is often at the mercy of circumstances, her lack of affiliation also gives her a kind of freedom, and it forces her to rely on her own judgment and cunning to make her way in the world. Her story will be a quest for survival.

This entry was posted in Blog. Bookmark the permalink.