I’d been keeping schtum for a while. It was difficult as I’d had some exciting news that unfortunately had to be embargoed due to a sudden news story that included a very negative portrayal of care experienced people. The headline read:

In short, a petition was started to stop a house on an estate being turned into a children’s home.

The Twitterati were pretty outraged that this type of discrimination was still happening. Why was a regional newspaper being allowed to run the story in the first place? Why were children in children’s home still being portrayed as trouble?

It reminded me of the time I was researching the children’s home where I had lived from 1966-1974. I went to the local archives and found that when the council first acquired the property, there had also been a petition signed by local people protesting. The year? 1937!

‘The committee had before them a petition signed by residents in the neighbourhood of these premises objecting to the County’s proposal and urging the council to take immediate steps to oppose the acquisition of these premises for such a purpose.’ Clerk to County Council replied: ‘The house will be used for the accommodation of not more than 12 healthy and normal children who ages will range from 5 years upwards, who will be placed in the care of an experienced foster mother…The home will be conducted as nearly as possible as an ordinary private family. The County Council state that they have a large number of similar homes in various parts of the country and it is not their experience, neither was it that of their predecessors that the children in this type of home are more a cause of annoyance and complaint than are other children, in fact the County Council are frequently complimented upon the conduct and bearing of the children under their control who are, it may be pointed out, subject to somewhat stricter supervision and discipline, than is sometimes the case of children living with their parents.‘(1)

I could write a lot more about the stigma of growing up with loco parentis but we’d end up being stuck here for some time, so for now it’s fast forward to 2019. Kenny Murray, Public Affairs Coordinator for Who Cares? Scotland, took up the mantle and wrote an open letter about the article, that hundreds of people have signed, to the UK Government Minister for Women and Equalities to meet and challenge this stigma:

‘It would be unthinkable to see an article about other minority groups written in this way. It cannot continue to be the case that Care Experienced people are stigmatised, judged and abused by people who have no idea about their lives. Had this article been written about any other group protected in equalities law, there would be some recourse.’

The point here is that as a minority group, care experienced people are not protected under the equalities law. 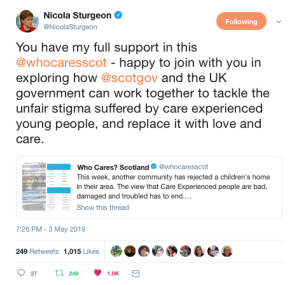 We’ve yet to hear back from the UK government.

The older I get, the less I believe in coincidence – Kenny had contacted me a short while before the news story broke to ask if I’d be interested in joining a media panel to take a deeper look at the impact of past and present portrayals of Care Experienced people and of course this is partly what I’m investigating in the PhD. The Media Panel will be looking at representations in media, film and literature. I was extremely honoured to be asked and of course, said yes. 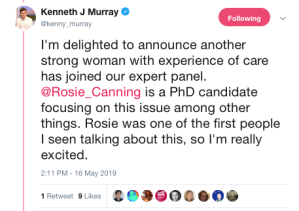 Our panel currently consists of me, Kenny and Kirsty Capes. You can find out more about the work of the expert panel & Who Cares? Scotland work on media portrayal of Care Experienced people here. 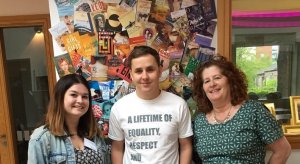 Kirsty, Kenny and Me.

If you see something about care experience that is discriminatory, stigmatising or downright prejudicial, then send us a link and the Media Panel will make sure it gets the attention it deserves.

Rosie Canning is a Doctoral Researcher at University of Southampton, focusing on the representation of orphans and care experience in literature. She wants to examine this research through the lens of both creative and critical practice. This means writing an autobiographical novel and a critical thesis.

Kirsty Capes is a PhD candidate at Brunel University, focusing on women and Care Experienced people in fiction. She is currently writing a novel and works in marketing.

Kenny Murray is a public relations graduate, with more than five years experience of working in private sector PR and communication. He has created fundraising, marketing and advertising campaigns that have featured in mainstream news media.